Unity, Line, and Colour in the Illustrations 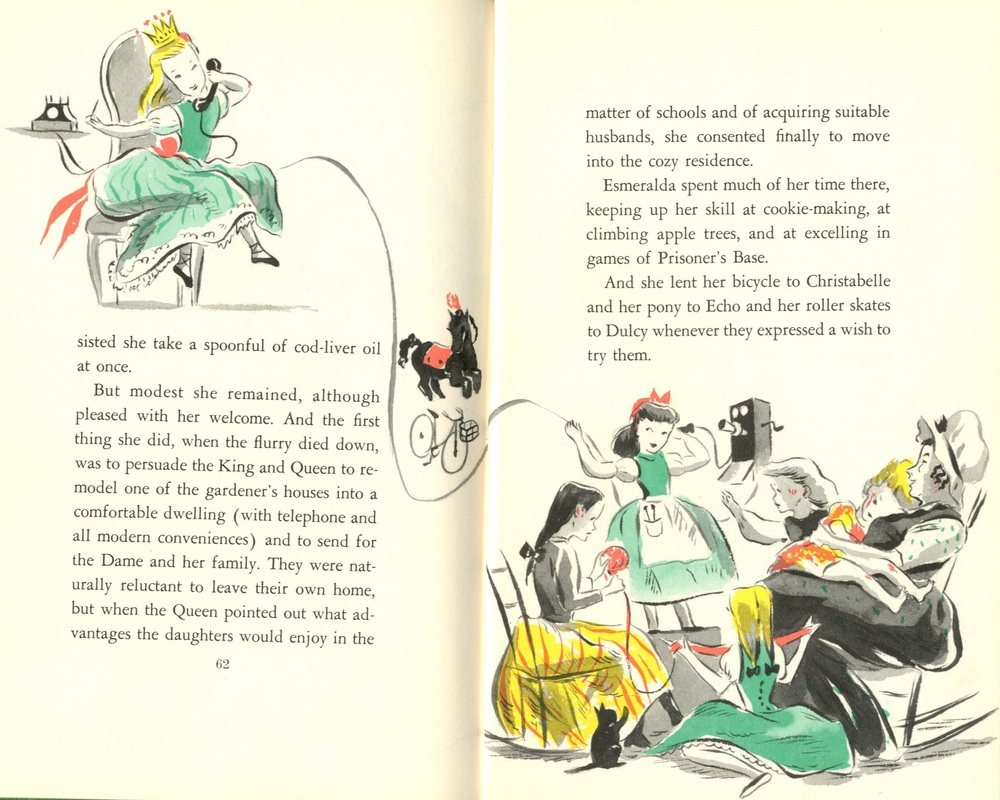 Helen Stone, the illustrator of The Plain Princess, accentuates the simplicity of beauty through her drawings. Her illustrations create unity between the clashing modern and classic fairy tale elements in the story. Every two-page spread involves at least one illustration whether it is a plant, a scene or a border. On pages 62 and 63 the illustration shows Esmeralda on the phone with the Goodwits. There is a stark contrast between the traditional dress of the characters and the modern technology of the telephone. These conflicting elements make it unclear where or when this story takes place. The depictions of peasant and royal life are certainly not typical to 1945 (when the book was published), but the telephone did not exist in the time of kings and queens. These two conflicting times and life styles, are unified by the illustrations of the story through Art's Principle of Unity. Unity is the sense of belonging a person experiences when viewing a piece of art. It can be achieved with many techniques but the two that are most distinct in The Plain Princess are Line and Colour.

Line is used to create movement. This can be in either: illustrations of things moving, or as a way to guide the eye. Often the lines of a piece will be in the same style consistently. Line is physically used to connect pages 62 and 63 but the wispy nature of all the lines in the book help to unify it as a whole. Since the type of drawing does not change from the palace to the Goodwit's residence, the reader associates the two as not being so different.

Colour is extremely important because it is able to change our emotions and perceptions of the story. The red, yellow and green colour scheme that Helen Stone uses helps to show Esmeralda's transformation from a spoiled brat to a lovely little girl. In the story green represents the good qualities in a person while red is present whenever Esmeralda is complaining or acting spoiled. At the beginning of the story Esmeralda is often shown wearing mostly red and very little yellow or green, while the illustrations of the more virtuous five sisters are completely green. As Esmeralda becomes a better person there is more green in her illustrations. By the end of the story, she is dressed entirely in green.